I'll call this a wearable-ish muslin, because I wore it out but it's really not built to last. Parts of it may or may not be held together with tape. 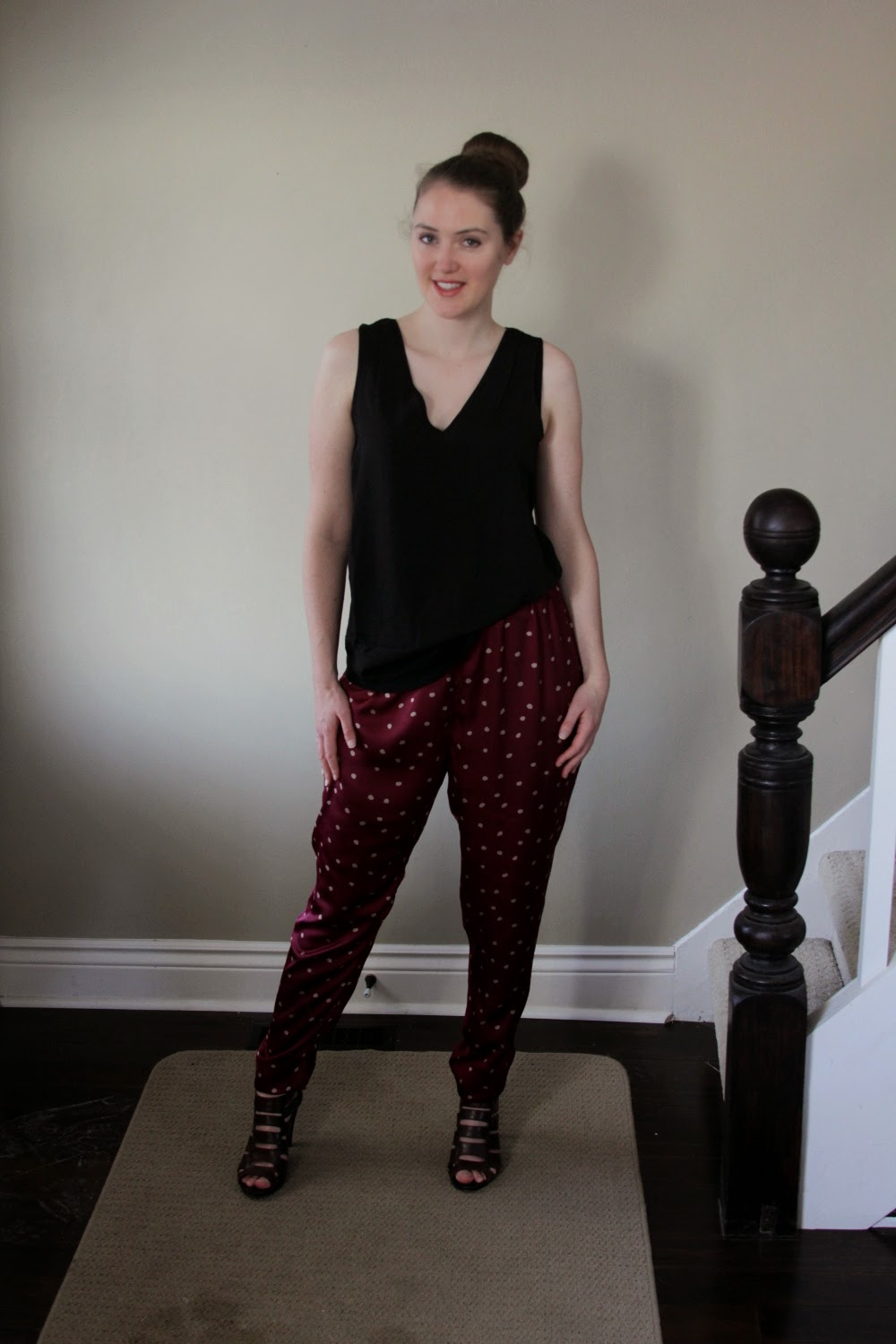 This is actually my third muslin. I had to make the whole waistband stretchy, not just the back part, for it to fit over my tuckus. 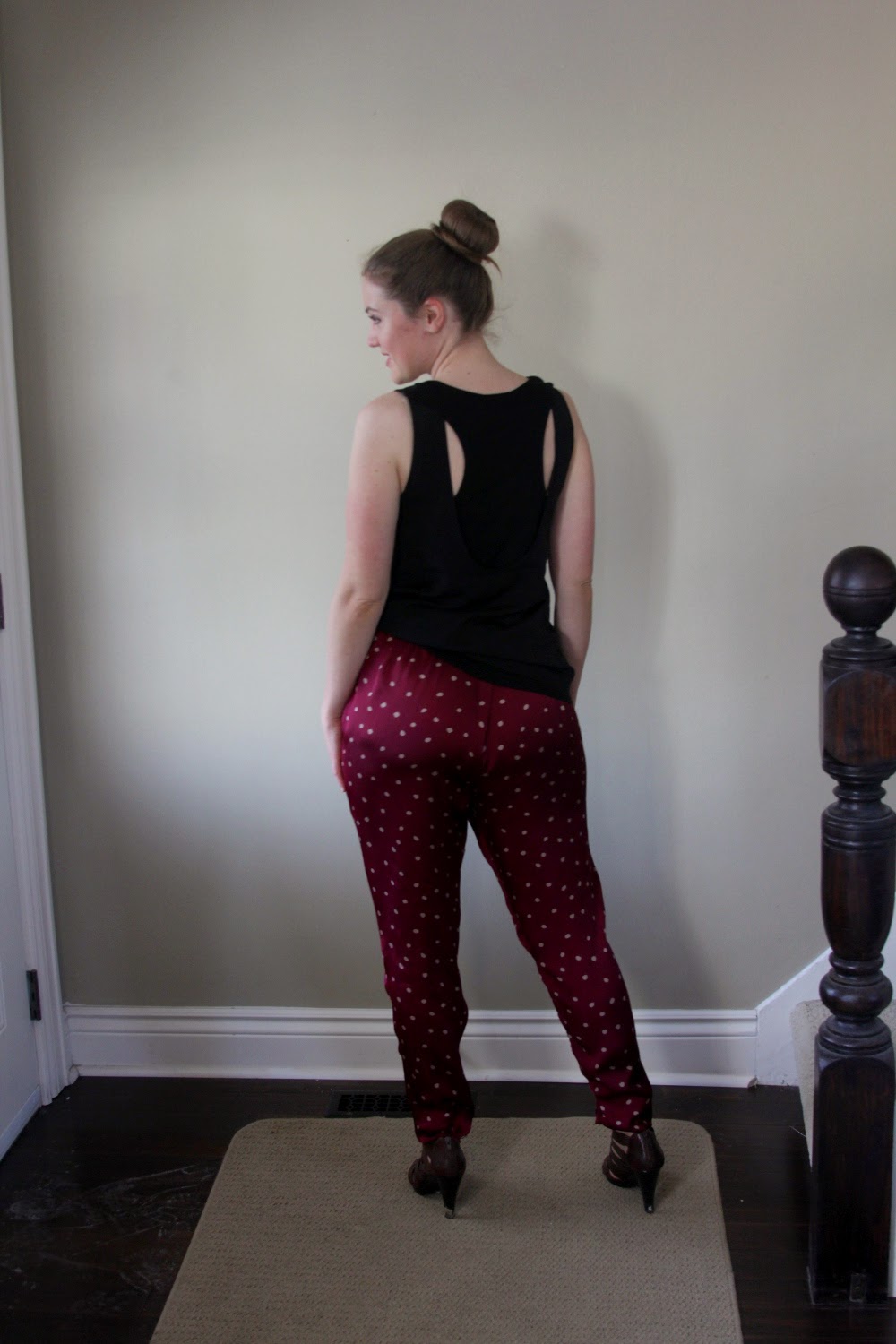 You may notice that these pants are all about the bass. I've decided that I'm OK wearing pants that make a big deal out of my butt (not that it needs any help). For so long I've been choosing clothes based primarily on how well they disguise my rear but these days I'm like eh, fuck it.

Super glad that big butts are in style.

Since I really got to test-drive this muslin, I've realized that it needs a little less length in the front crotch (it gets a little diaper-y when i bend forward) and a little more in the back (there's definitely some wedgie action when I sit down or go up stairs). I'm also going to straighten the side seam a little. Since they've got so much ease, the side seam doesn't really need to curve around the hip. I think I'll make a pair in black wool crepe and then tackle the silk. So excited!

Edit: these are made with the Burda Style Elastic Waist Pants 10/2015
Posted by DanaRose at 20:58 No comments:

Hey, you know those drapey pants that have been a thing for a couple of years? The ones that usually have an elasticated waistband and sometimes even elasticated cuffs? 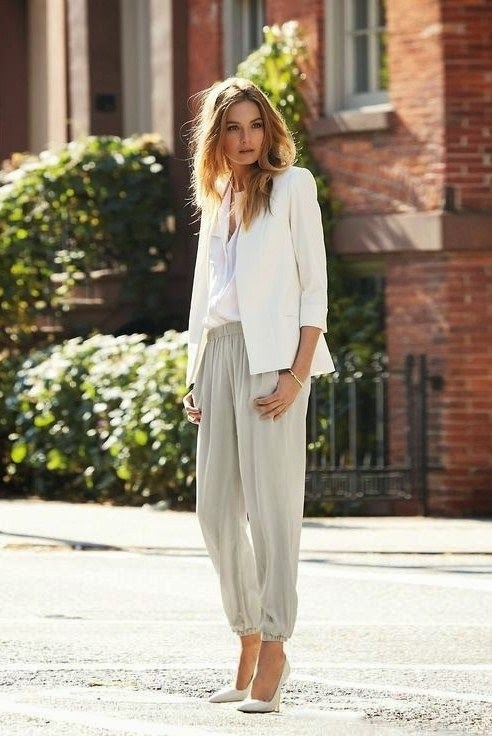 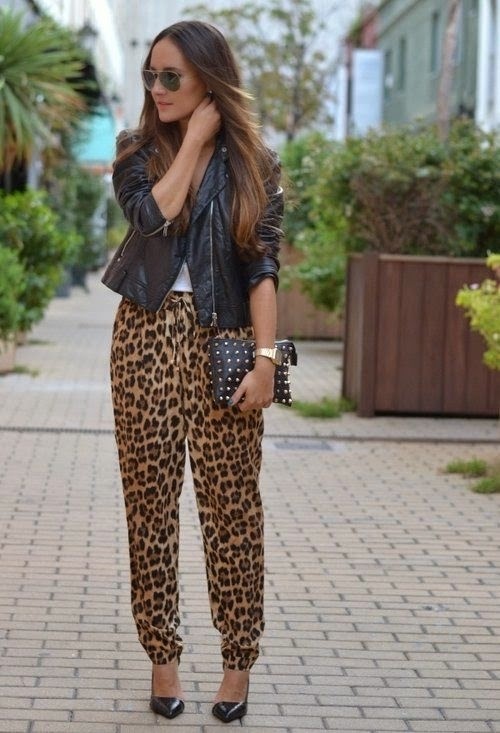 Yeah, up until a couple of days ago I hated them. And then I tried some on and now I must have some. I don't even care. I want them to be super floral, too.

Imagine how cool I will look once the spring weather hits! I'm assuming it will be spring any day now, right?

Anyway, here are some more photos I'm using for inspiration. 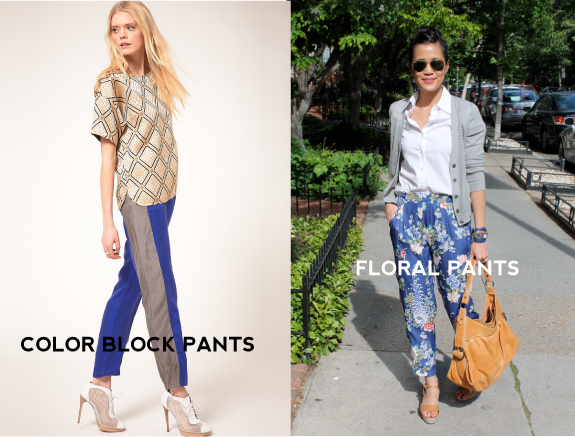 Look at those floral pants! I will totally rock mine with a button-up shirt. 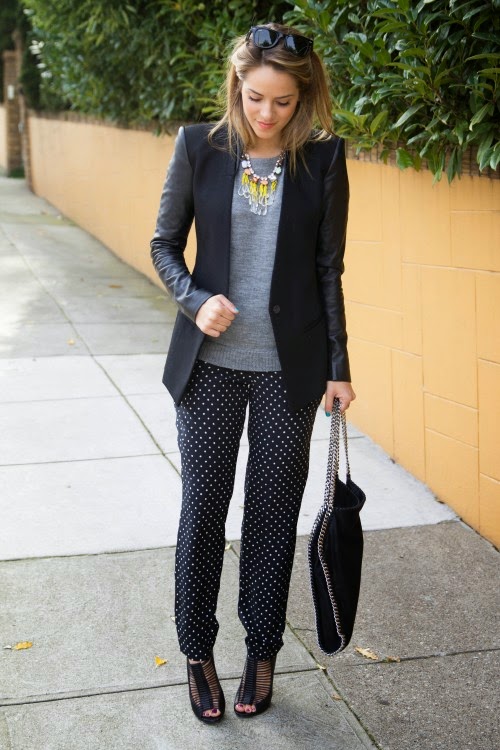 Oooh, or a blazer. 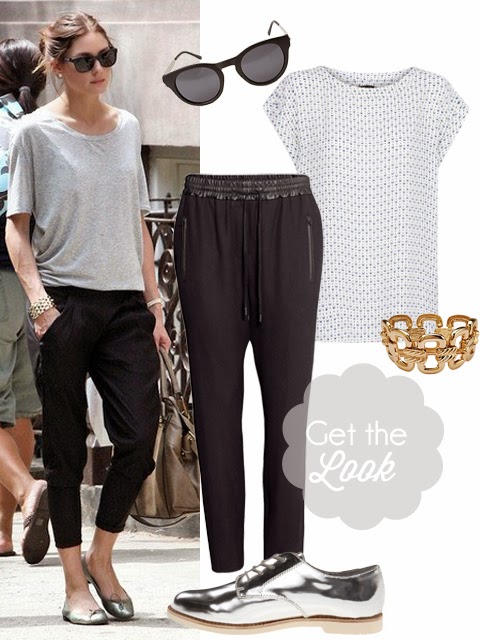 Hmm, these are a little low and a little short for me. Cool casual look, though! 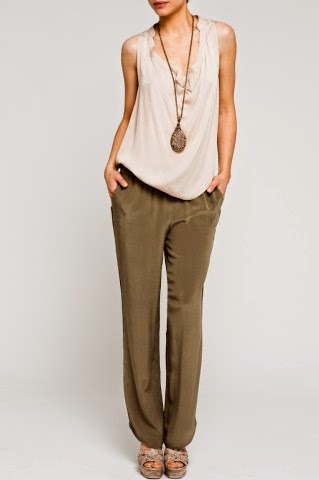 At first I was thinking that I would use the Hudson pant pattern and modify it for a woven, like I've seen a few bloggers doing, but I ended up going for the Burda elastic waist pants - hot off the presses January 2015. 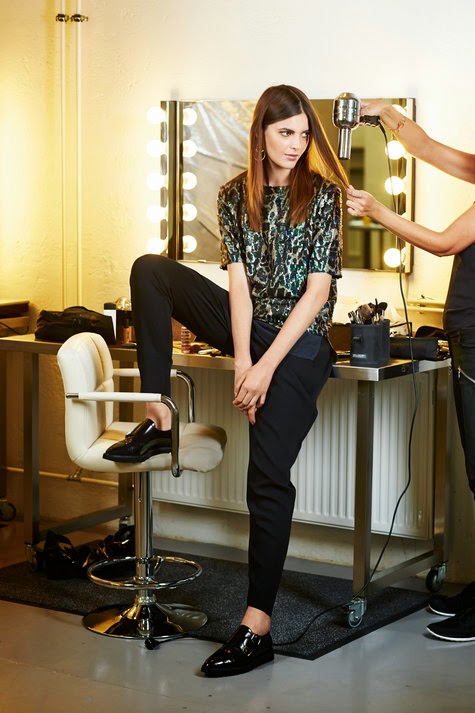 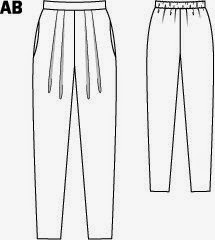 I like that these are a little less casual than the Hudson pants, since they've got a flat front waistband. I'm going to change the pleats into gathers, I think, and change up those pockets or omit them completely.

I've even ordered the fabric! This stretch silk charmeuse from Tahari that's already on it's way to me from emmaonesock. 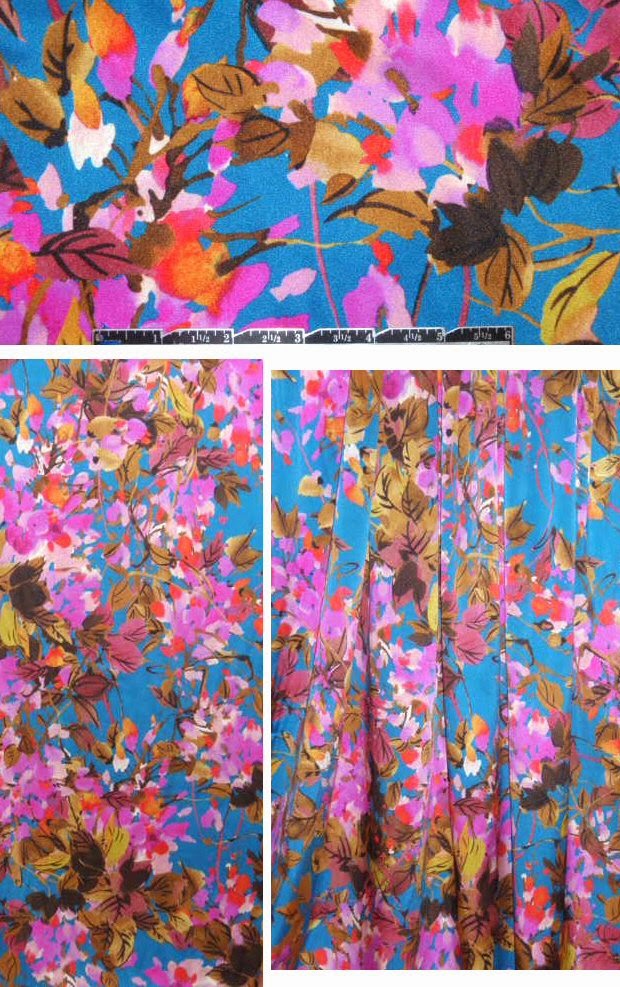 I didn't realize that it was stretch until I'd already ordered it, so hopefully it works out! I think it will, though.

I have my pattern printed and I've got some cheap drape-y polyester to practice with so hopefully I can get a muslin done this weekend.

Other fun stuff that I've been doing

I've taken almost a complete break from sewing in the last few weeks. Not because I don't have a lot of plans but because I've been working on another project that has been a lot more urgent than any new clothes I might want to make!

I can't really share any details, other than my boyfriend's band is working on a huge project and I've been lending a hand. What's great about this project is that it inspired me to make some things that I've never tried before. New skills are fun!

One of the biggest things is that I started using inkscape again. I experimented with it a couple of years ago when I was trying to design fabric (I gave up). This time I used it to design a paisley lion! 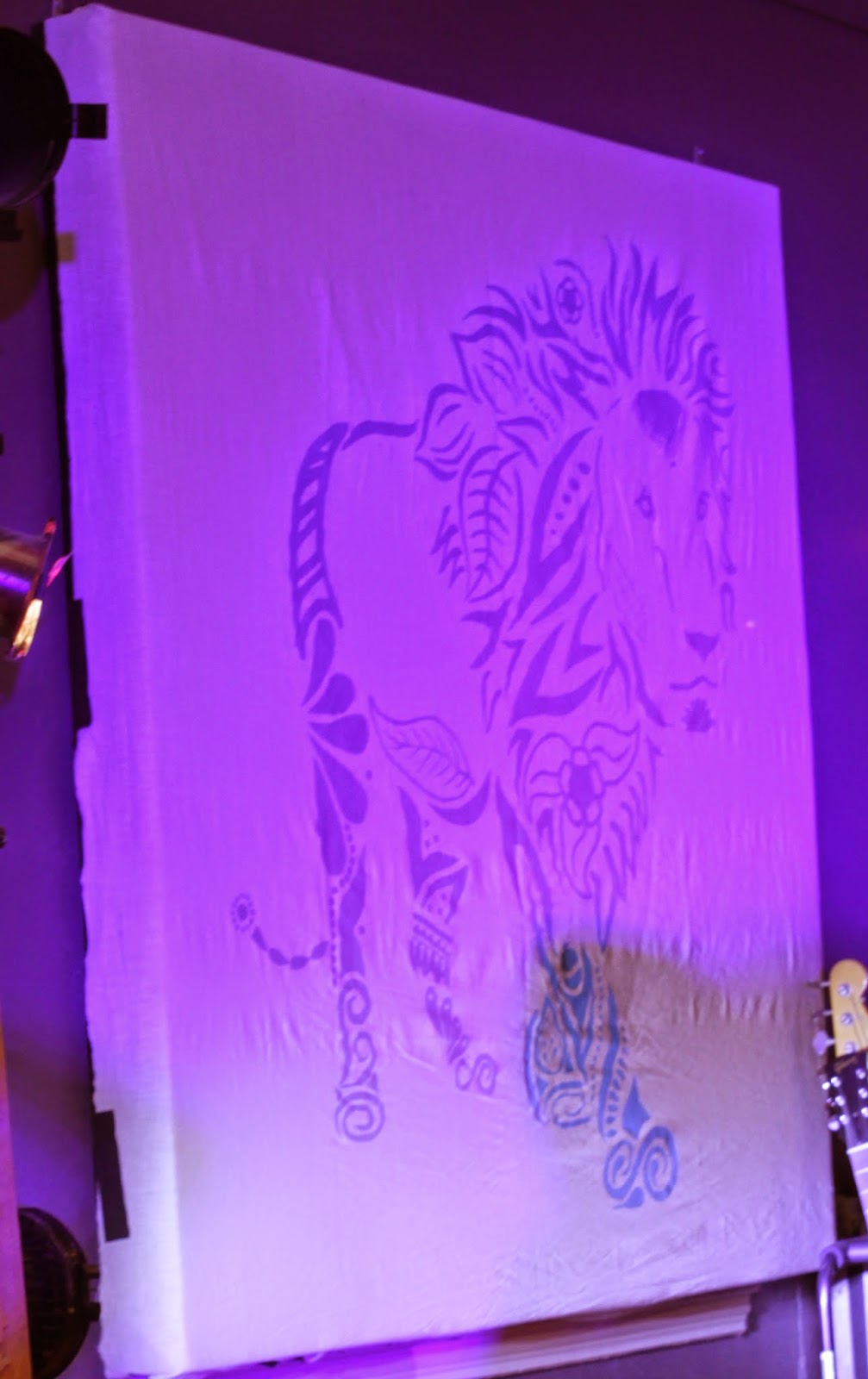 I knew I needed something to brighten up a corner of the space that the guys would be in. One of the inspiration photos that we had been working from had an elephant drawn using paisley shapes.

It took me two days but I managed to make something similar with a lion (there's a lion on the band's most recent album). 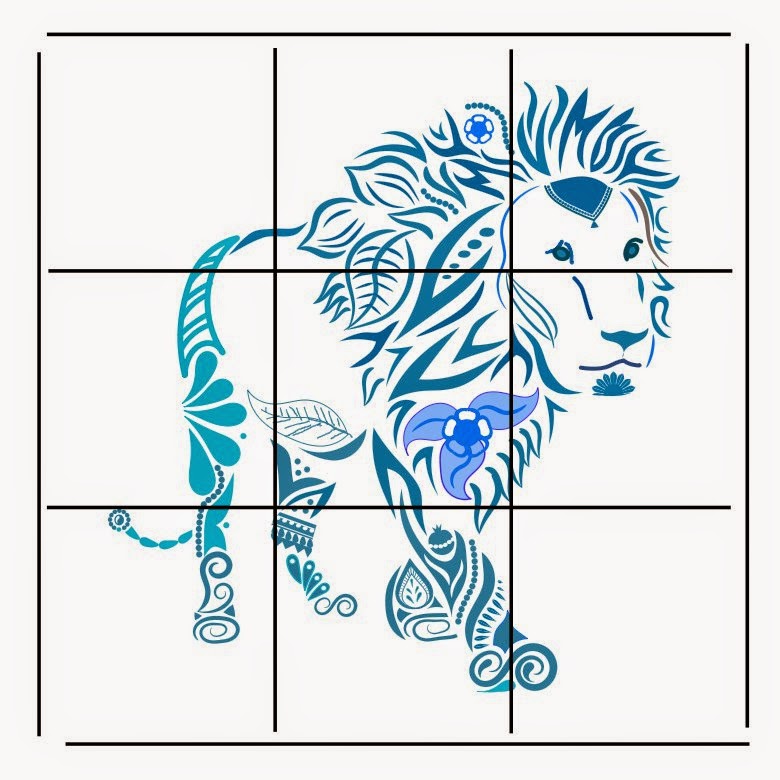 I wanted the banner to be at least 6' x 6' and I was lucky to have a huge piece of muslin in my stash - 6'6" square! I had bought it at value village a couple of weeks before.

I knew I could use a projector to help trace the image onto the muslin but I didn't have any walls that were big enough!

I borrowed a projector from a friend and used a grid (on the image and on the blank muslin) to line up the sections of the image for tracing.

My friend Nicole helped me trace everything onto the muslin in pencil. And then we started painting! 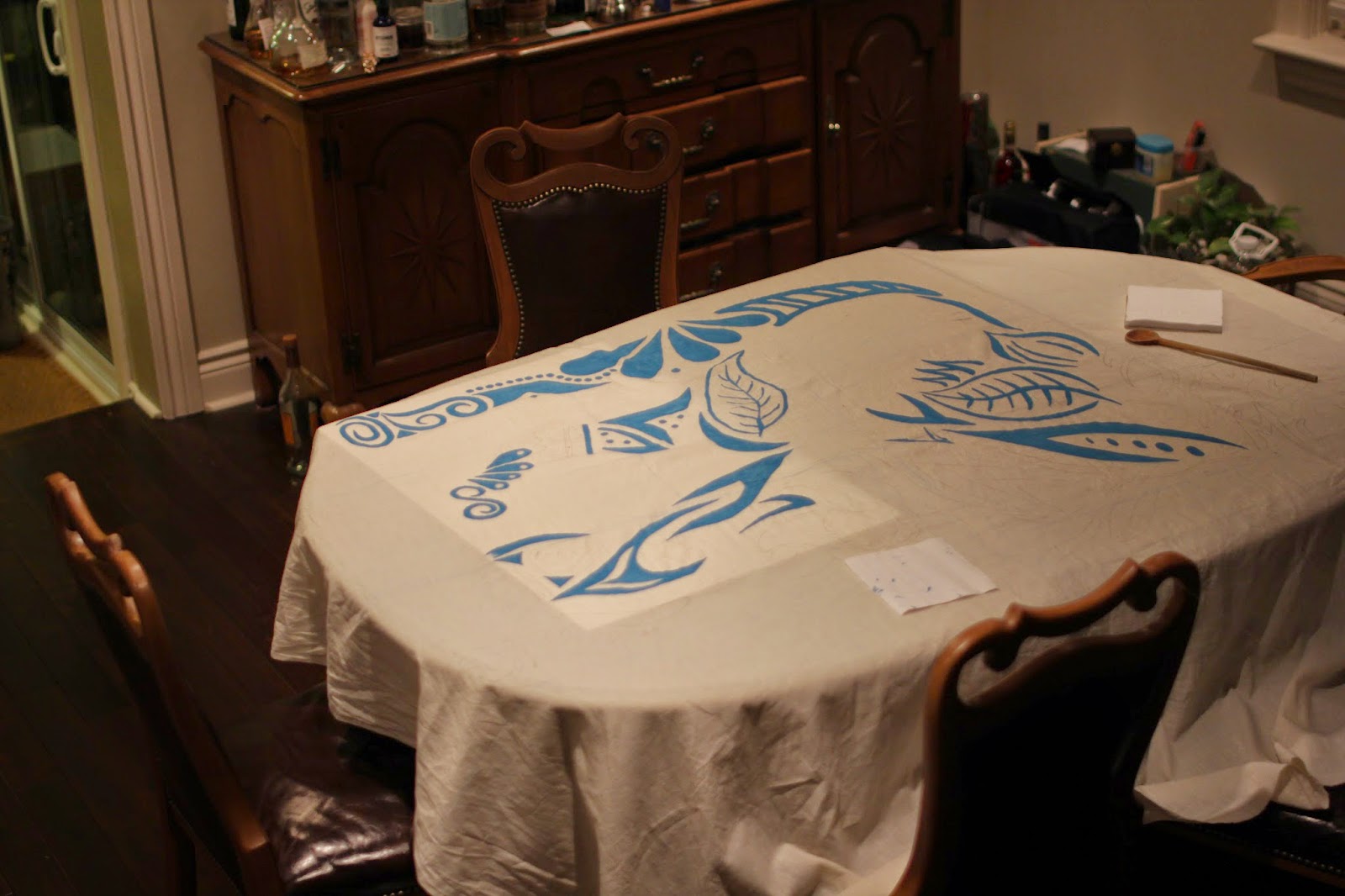 We used Golden GAC-900 fabric painting medium that makes any acrylic paint into fabric paint. I've used it before to decorate aprons and tea towels that I made as gifts but this was my first time doing anything so big! It took a good 2 days solid of painting to get it done. Also, we had some trouble because the paint soaked through and stuck to the cardboard that we were using to protect the table and stuck to it! By the time it had dried it was on there like glue! I switched to a plastic drop sheet later and that helped a lot. 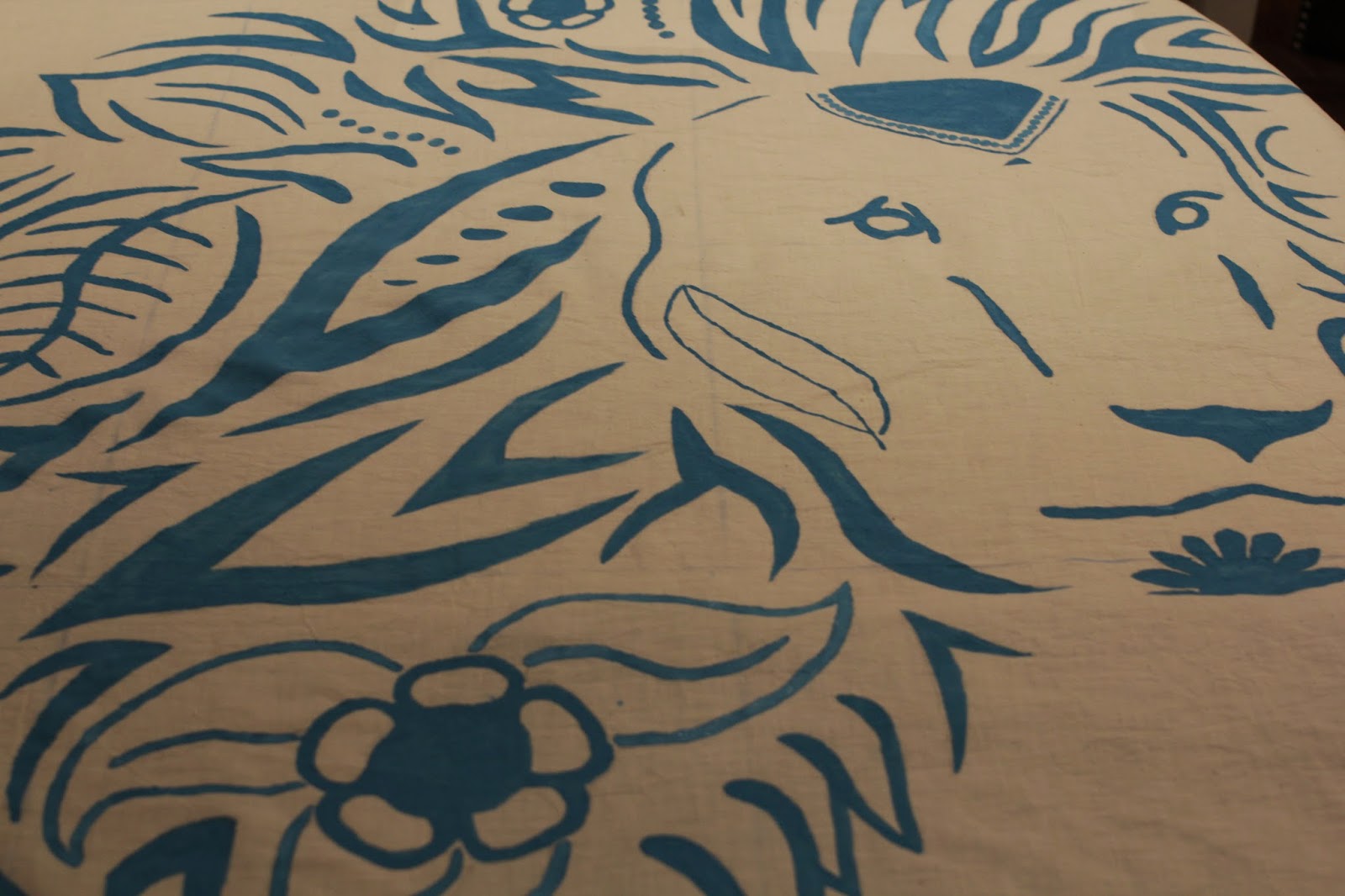 I also needed something large and interesting for another blank space above a door casement. I bought some big canvases (they were 50% off at Michael's, plus I had just signed up for their mailing list, so I got another 20% off!). 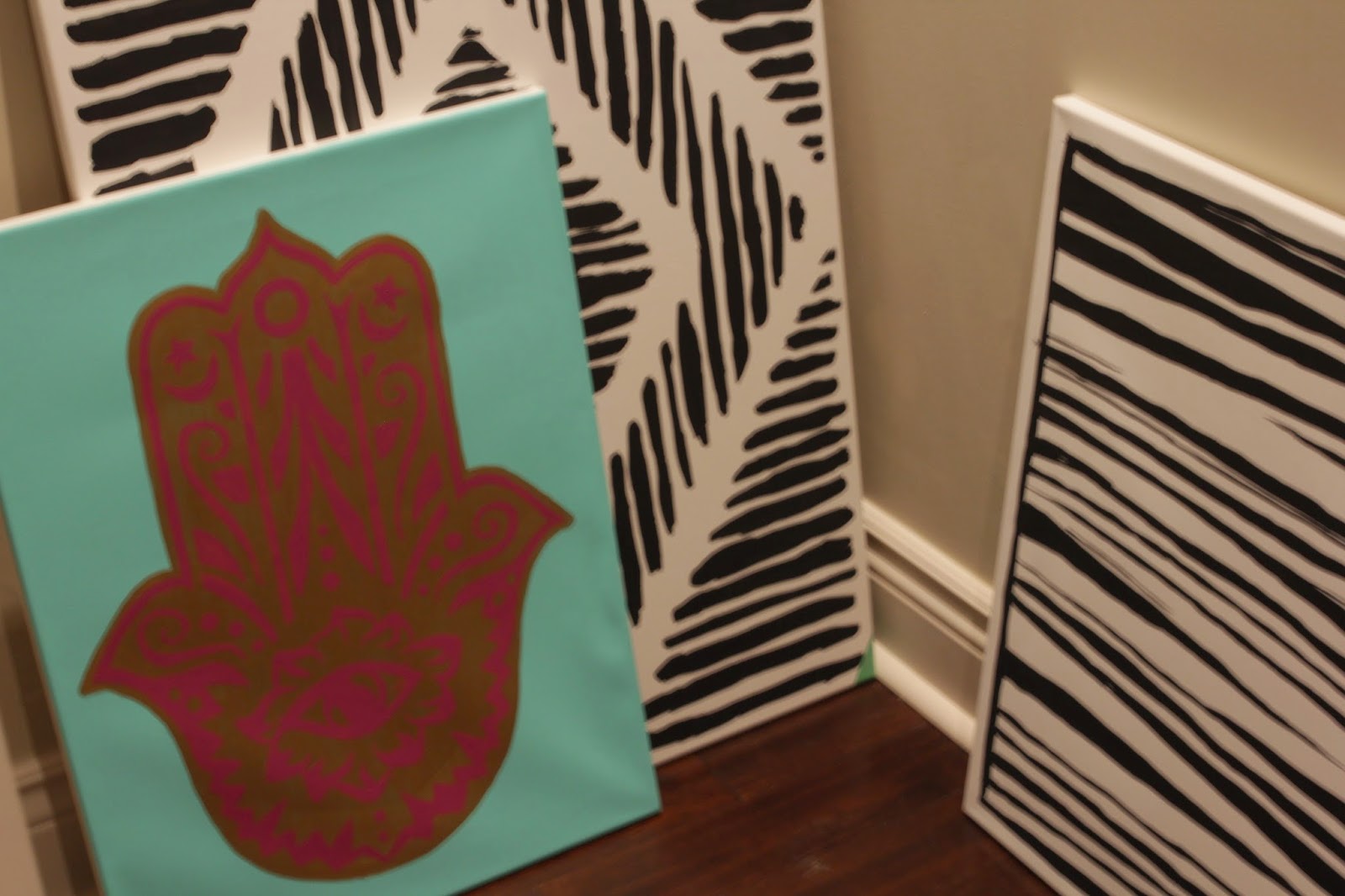 The black and white ones were inspired by tribal designs and the hamsa hand was in the hopes of warding off the bad luck that's been following the band around (I'm talking some seriously bad luck, you guys. You don't even know). 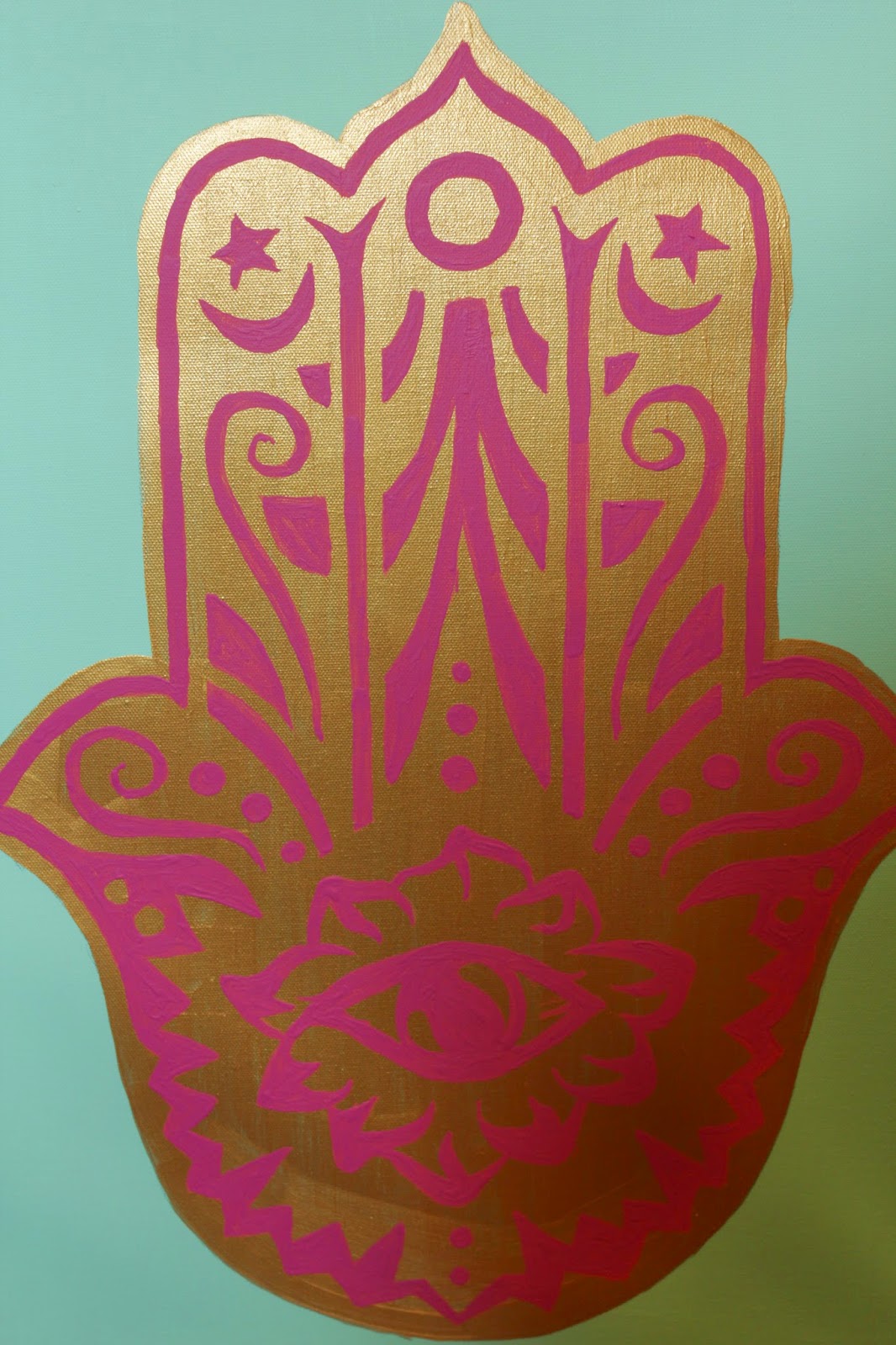 I just got an image online and used the projector again to trace the design I wanted. I love the gold paint I used!

I think this was my first time painting on a canvas, ever. The projector makes it so easy to create cool designs, I think I might make some more and hang them up in my house! At the very least, it will be some fun decor to have until we get real art.
Posted by DanaRose at 10:42 No comments: