Flowers on the dunes

Oh, hi! Have you been to Oregon Dunes National Recreation Area? It's pretty there! So I took some pictures of my new pants. 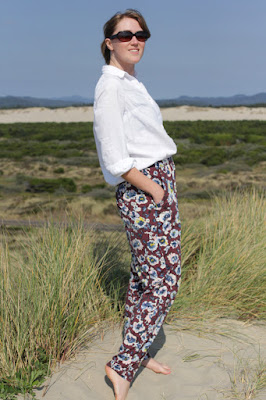 For these pants, I used this pattern (which I've gotten some good mileage out of!) with rayon jersey. So comfy! These were definitely made with a road trip in mind.

Of course, a couple days after I took these pics, I was watching the Big Lebowski (I was in LA and needed some alone time with Netflix) and look at those pants! 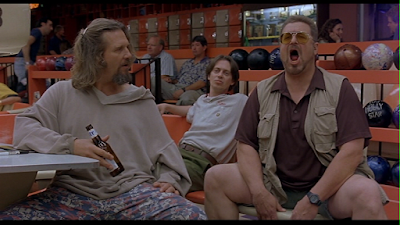 Yep. I made a sartorial choice reminiscent of the dude. Not sure how I feel about that. 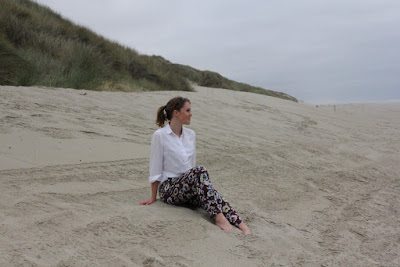 Man, those dunes sure where neat! The weather was pretty crazy, though. Like it was blue skies from horizon to horizon when we got there but within a few minutes it was all clouded over and cold! 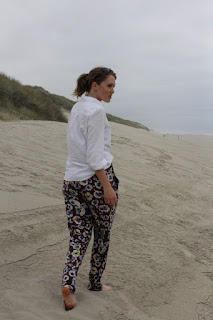 So in other news, my sewing machine has been in the shop for like a month! And it will be $250 before it's back. The needle thingy was slightly misaligned and ...yeah. Really wishing I had bought a new machine instead of used.

Posted by DanaRose at 19:49 No comments:

Oh, hello there! What have you been up to?

I've been on a road trip down the west coast of the US, from Seattle to LA. My boyfriend went on tour with a band and I joined for the last week. It was cool getting to see the amazing landscapes of the coast and mountains, but I got hardly any time to spend in the cities! It was pretty hard sitting in a car all day without the reward of getting to explore some of America's most iconic cities.

Anyway, I had done some sewing in advance of the vacation in the hopes that I could get some great pics! They didn't turn out exactly as I had hoped but that's life, no?

While in Portland, I wore this gorgeous new silk skirt that I made! 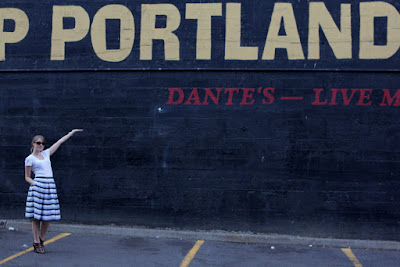 I wish I had gotten to see more of Portland! We basically hung around the neighbourhood where the show was, which was pretty rough. We did get dinner at some delicious food trucks, though. Yum! 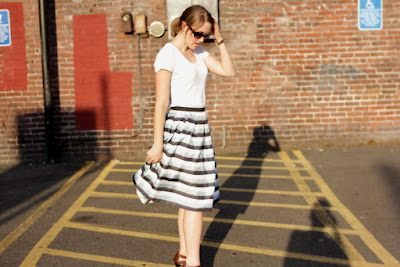 This skirt though, amiright? I've wanted a striped skirt for ages so when I saw this fabric on emmaonesock.com I knew I had to have it. It was quite sheer so I underlined it with white bemberg  which also gave it a little extra body and movement. Because nothing says road trip like a very fancy skirt. 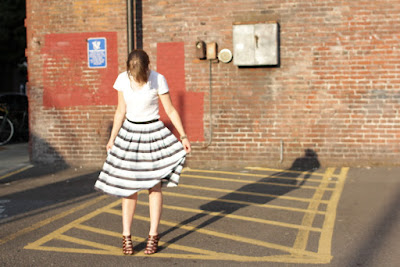 Wheeeeeeeeee! So float-y. I just wish I had been able to get photos in a nicer location! 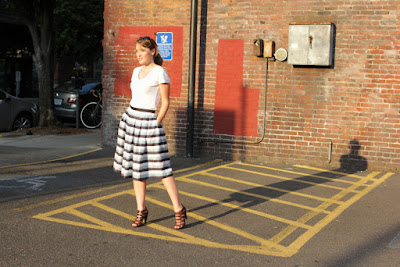 Oh, also pockets! I used the same pattern as this skirt (tutorial here). Only this time, I had the inverted box pleats open up right at the waistband, whereas with previous versions I had stitched them down for a couple of inches from the top. 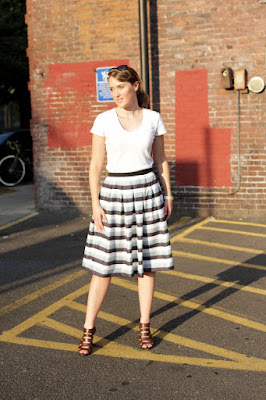 Found my light. And my cheekbones. Thanks Tyra! If only it was the golden hour all the time.
Posted by DanaRose at 10:10 No comments: